The Housing Industry Association reports that building approvals continue to provide evidence of a ‘soft landing’ for residential construction in 2004/2005.

HIA’s Senior Economist Harley Dale said that the trend decline in total approvals had been arrested. “After six months decline in building approvals through to March this year, the trend has now turned very marginally positive again as a result of the continued growth in multi-unit approvals.” 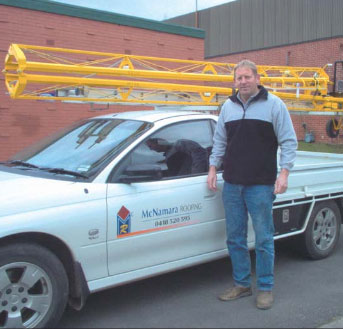 WINNER(S)
OF THE “OLDEST HOIST” COMPETITION

What car were you driving in 1972? What tools or appliances do you have from this era that are still giving you good service? Can’t think of any?

Well, if you’re like John Craine and John McNamara, you’d know the answer: A HYTILE HOIST

The entry for the oldest Hytile hoist was received from Melbourne tiler John Craine. John purchased his hoist 32 years ago on the 16th February, 1972 and said

He says he only entered the competition to find out if his hoist was the oldest still in operation. He didn’t want a new one because his is “still going strong, and will probably see me out”. 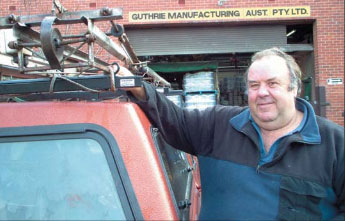 So the $2,000.00 credit towards the purchase of a new Hytile hoist went to our runner up Gary McNamara, from Eaglehawk near Bendigo in Victoria.

His hoist was manu-factured in September 1973, and he will continue to use it, along with his new 2004 model “V” shape Rapid ReturnCable Hoist.

Perhaps he’ll be back for a new one in another 31 years!
John Craine with his “old beauty”

INVEST IN YOUR BUSINESS
Hytile equipment is not a cost, it’s an investment which continually earns you money

Well designed, robust equipment that does the job it was designed to do quickly and efficiently is a necessity for all tradespeople.

Through consultation with tilers out there on the job and feedback from the many users of our equipment, we at Hytile have been able to spe-cialise in designing and manufacturing roof tiling equipment that will meets all of your requirements.

Hytile have been in the business for over 39 years which means you have the security of knowing that not only are you getting the best products available, you are also dealing with an experi-enced and reputable firm.

Hytile products are reliable, versatile and robust, and are backed up by after-sales service and advice that is second to none, so call us now for investment advice for your business! 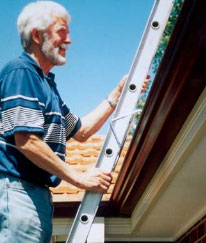 Protect you and your guttering from scratches and dents. For a number of years now we have manufactured and supplied the Gutter Pro to roof tilers.

This useful device elimi-nates the scratching and denting of gutter-ing that ladders can cause, and assists in keeping you safe by helping to prevent your ladder from sliding sideways.

We also stock a larger model for use with battens. For a 5% discount on a Gutter Pro, tell us who said the following:

“Work keeps us from three evils: boredom, vice and need.”

LEASING A HOIST OR ELEVATOR

If you’d like to update your old machine, consider a leasing arrangement. For as little as $60 per week you could take possession of a brand new hoist or ele-vator.

Give Caroline or Julie a call for further information. 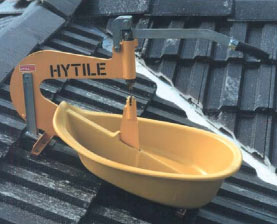 Are you still using an old Tilecutter?

If you’d like goods delivered to your home today ready for tomorrow’s early start, or you’ve run out of something on the job, give Caroline or Julie a call and they’ll arrange prompt delivery.